The 12 Best Apps to Teach Your Kids Rhythm

How Much Do Music Lessons Cost + Pros and Cons

What is a reasonable price for guitar lessons? This article will break-down different price-tiers of music lessons END_OF_DOCUMENT_TOKEN_TO_BE_REPLACED

How Much Do Music Lessons Cost + Pros and Cons

How can you talk to your child in a way that helps them have productive practice sessions? END_OF_DOCUMENT_TOKEN_TO_BE_REPLACED

How Old does my Child need to be to Start Music Lessons?

This article is for parents wondering if their child is old enough to start music lessons, what END_OF_DOCUMENT_TOKEN_TO_BE_REPLACED

How Old does my Child need to be to Start Music Lessons?

Are you wondering how you can use an iPad or iPhone to help your child develop an incredibly strong internal sense of rhythm?  In this article, I’m going to focus exclusively on apps that deal with rhythm. I’ll be giving you a list of different categories of apps that help develop different aspects of rhythm and tell you my favorite in each genre (with some short reviews). At the bottom of the article, I’ll give you a “lesson plan” to follow to help you guide your child through these apps in the most sensible way possible.

To give your child a firm rhythmic foundation, you’ll need some popular genre rhythm games, some echo games, rhythm reading apps, and at least one advanced metronome.  your child to read notes, you’ll need to use flashcard-style note-reading apps, sight-reading Apps, rhythm Apps, aural skills apps, and composition apps. Generally speaking, you can use aural skills apps, rhythm apps, and flashcard-style note-reading apps concurrently. Later on, your child will be able to use sight reading apps and composition apps after they’ve developed their knowledge more thoroughly.

Unlike most of my app review articles, this article will have some cross-platform apps. This is because rhythm games generally have a much broader appeal than other music games, making the hassle developing two (or more) versions worth it. I also suspect (but have no evidence) that these sorts of apps rely less on the low-level programing issues that plague would-be Android music app developers.

As always, keep in mind that niche apps serve a small audience and, as such, it is difficult to recoup development cost via ads. As a consequence, many of the more niche apps on this page are paid products.

None of these links are affiliate links; I make no money if you buy these apps.

Rhythm-based video games reached incredible levels of popularity in the late 2000’s and early 2010s with popular franchises like “Guitar Hero”, “Rock Band”, and more. While games in this genre were never meant to be pedagogical, they do help a strong rhythmic sensibility and physical coordination with the beat. Here, I call them “Rhythm Matching Games”, as the goal is to accurately coordinate actions with the music being played. In its most simple form, this is simply tapping the screen when the indicators line up. In more complex examples, it may mean rhythmically moving around a Minotaur in a dungeon so as to pick up some buried treasure and get a power up.

T-M-A-S-G (The Most Amazing Sheep Game): In this adorable game for children of any age, children control a sheep that has to jump over gaps and other sheep to reach the end of the level. Think “Mario Brothers”, but with a self-propelling sheep that needs to jump over rhythmically-placed obstacles. This game starts simply with only an emphasis on the downbeat, which is the most important beat in music. It then incorporates more and more beats and, eventually, subdivisions of each beat, giving children a comfortable introduction to

Beat Blasts: From the same developer as Epic Orchestra (below), this app is quite simple, and that it’s its strength. Like many of these games, playing involves following some sort of visual cue; in this game, the cue is falling pentagons. When these pentagons reach the outer ring, you tap. Simple! These Rock and Roll songs all have a strong rhythmic groove and clear verse-chorus-verse structure, which allows students to “lock in” to the pattern and really master it. I think the pentagon is an interesting choice; it seems to be far easier to gauge  when the pentagon will arrive because it has corners; I think if it were a circle the game would be much harder. However, I suspect the pentagon was chosen because of it’s rock-and-roll associations.

Tap To Da Beat: Tap To Da Beat is another great game that is a real level up from Beat Blasts. This game utilizes groovy-heavy club music with more complex rhythms that the previous games on this list. Unlike almost every other game here, it requires the use of both hands. Additionally, there are held-notes; no longer can your child just tap a rhythm like a drummer would, they will now need to hold a note down for the full value of the note. This rhythmic awareness is essential for all musicians.

Epic Orchestra: From the same developer as Beat Blasts above. In this game, your child will be the conductor of an orchestra animated in an 8-bit style (again, think of “Mario”, but this time for the graphics). They’ll need to swipe their finger in the correct direction and if they miss too many of their swipes, their orchestra members will disappear in a puff of smoke. Fortunately, after an extended run of accurate “conducting”, the members will reappear in an equally inexplicable puff of smoke. This game is notable in that its tracks are slightly-stylized versions of famous pieces of the classical repertoire.

Necrodancer Amplified (multi-platform): Building on the acclaimed “Crypt of the Necrodancer”, this game is a dungeon-crawling RPG. Your child will slay dungeon creatures, find lost treasure, and discover power-ups to build their character’s strengths. Has much more longevity than many apps on this list. Check to see if you consider the content age-appropriate for your younger children (skeletons, zombies, ghosts, basically everything you wold expect in a game called “Necrodancer”. Animated in an 8-bit style, so nothing very realistic). This game is available on all platforms.

Beat Sneak: This game is on the same level as The Most Amazing Sheep Game; just tap to the beat. The graphics and story line (a thief who needs to sneak through a Clock-Obsessed Duke’s house to steal clocks) are really fun and a bit more engaging for older kids.

Just Dance (multi-platform): The classic dancing video game is a great way to get your child’s entire body involved in rhythm. This will really help them integrate their rhythmic awareness. You can buy used copies of older editions, or use their new subscription service.

Echo games help develop your child’s aural ability; their ability to hear and recreate music. This can drastically decrease the amount of time it takes them to integrate new musical material.

Circles: In this app version of one of Tonic Tutor’s website games, students hear a rhythm and need to tap it back. Rhythms start very simply and increase in difficulty. A fairly simple but effective app.

Rhythm Bear: A cute teddy bear taps a rhythm over 1 bar (4 beats) of music, and your child needs to immediately repeat it. I find this game to be very difficult and the bear’s feedback to be a bit blunt.

Reading rhythms is key to reading music (the other competent being reading pitch). These apps will help develop that ability. Unfortunately, none of these are perfect and they all miss some key aspects, so all of them are necessary to get a well-rounded skill set. Even combined, they’re a bit incomplete, but they’ll get you 90% of the way there.

Rhythm Cat 1 & 2: Two of my favorite games in James Uhart’s cat-themed games that teach many aspects of music theory. In these games, music plays and your child taps the rhythm of the melody, which is displayed on-screen. Once played, each note changes color depending on how accurate your child taps the rhythm. These games do introduce some more complex rhythms in a very approachable manner, which is great from a teacher’s perspective.

The game is made approachable with lots of cat sounds; meows and purring when pressing buttons and navigating through the menu, etc, are a strangely comforting touch. At the end of every level (10 lessons) your child earns a chance to give the game’s Pet Cat a new toy, cat house, flower, or other nice thing.

Rhythm Swing: This game teaches the basic rhythmic values (both notes and rests) using a “bouncing red ball” that bounces along above the rhythms that your child will be learning, guiding your child to to tap along. With each accurate tap, a monkey swings along the vines, barely escaping the clutches of a hungry alligator (or is it a crocodile?). An error drops the monkey down to the ground, where it runs away scared from the crocodile.

Rhythmic Village: This is the most complete game in the rhythm-reading list, and by a wide margin. It teaches the largest variety of rhythms, and in the wide variety of methods. The premise is that the player has landed on a remote island inhabited by rhythmic creatures and characters, all of which are in the form of rhythmic notation (quarter notes, triplets, etc). The player must learn to communicate with these creatures by learning their language, which is, of course, rhythmic notation. Games include echo games with notation (play what I play), dictation games (figure out what was played, and write it down), aural differentiation games (from a multiple choice of written rhythms, pick which rhythm was played) and more. Actually, I find that this game uses many of the same pedagogical ideas that my college-level aural theory classes did!

A Basic Metronome:  Learning to play with a metronome is a key skill in any musician’s life. There are an insane amount of metronome apps out there, and many are quire good. You only need something basic; I almost never use anything beyond the most basic settings. I use “Tempo Advanced”, but the free version, Tempo, works perfectly well. Most free metronomes are perfectly adequate.

Drum Genius: Having a drummer around to practice at all times sure would help a lot of my students feel the rhythm. With a drummer constantly keeping steady time and demarcating the emphasis in each measure, this would give students a big boost in understanding the pulse and rhythm vs. simply playing with a metronome. Drummers know it, and that’s why they have Drum Genius. The app’s icon and interface look to be at least 8 years old, but it gets the job done. Your child can pick from hundreds of short drum loops in all different generes and srtyles and adjust the seed up and down to match their current ability. I love using this to practice scales; it really makes the exercises much more engaging.

I would go through these apps in basically the order listed here, with some slight adjustments. Here’s the exact progression:

Let me know how this progression worked for your child in the comments below.

The 11 Best Apps to Teach Your Kids to Read Music 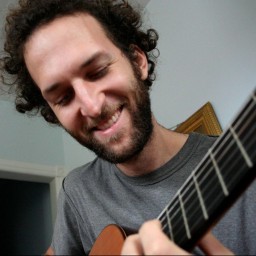